The South African National Treasury has published new draft Treasury Regulations under the Public Finance Management Act 1 of 1999 to replace the current 2005 Treasury Regulations. Included in the new draft is an entire new section (Part 7) dealing with Supply Chain Management and setting out in significant more detail than the current Treasury Regulations the legal rules for public procurement. The draft aims to give more explicit content to the five constitutional principles governing public procurement, namely fairness, equity, transparency, competitiveness and cost-effectiveness. Noteworthy developments are strict rules about tender awards to persons in the service of the state, mandatory participation in transversal term contracts arranged by the relevant treasury and extensive formal reporting requirements of all procurement transactions.

The draft regulations can be found here >>

APPRRU’s comments on these regulations are available here>>

Prof Geo Quinot, director of APPRRU, was recently appointed by South African Minister of Health, Dr A Motsoaledi, to two task teams in the National Department of Health focusing on procurement of medial diagnostics and pharmaceuticals respectively. The task teams will advise the Minister inter alia on the establishment of regulatory processes within the Department of Health for future procurements.

On 23 July 2012, South African Finance Minister Pravin Gordhan announced that the treasury would create an oversight unit on public procurement. The establishment of this oversight unit would be aimed at actively enforcing supply chain management processes and would include the appointment of a chief procurement officer.

Gordhan stated that transactions of a particular size or type may be subject to scrutiny. He further announced that the treasury would develop IT systems which would enable the active monitoring of compliance with financial management requirements. These systems would enable the treasury to access information regarding instances of public procurement.

The move comes after the publication of a recent report by the South  African Auditor-General Terence Nombembe on the results of local government audits. The report found that only 5% of municipal entities had achieved clean audits for the 2010/2011 financial year. The report further identified the lack of competencies and skills, as well as the lack of consequences for poor performance as the root causes of the troubling audit results.

Gordhan emphasised the need for government to demonstrate that poor performance and non-adherence to legal requirements in public procurement would be met with more severe consequences.

State Commercial Activity – A Legal Framework analyses the state’s conduct as a market participant from a legal perspective. 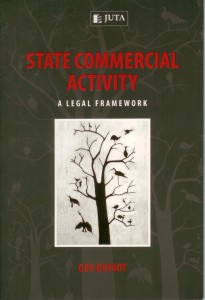 It focuses on the judicial control of such state conduct and puts forward a legal framework in terms of which to understand state commercial activity, including public procurement.